Besides H. P. Lovecraft’s use of tentacles, there is an older, more telling artefact that warrants attention. The below image is titled The Dream of the Fisherman’s Wife (Katsushika Hokusai: 1820) and is an example of early Japanese art that appears to “celebrate female sexuality rather than simply creating an image for male fantasy” (Stockins 2009).  The woman in the picture looks more as if in a moment of ecstasy than distress, and the dialogue printed in the background “expresses the mutual sexual enjoyment of the woman and the octopus” (ibid.).  It is startling to consider that in my own research I have rarely found hentai that celebrates women’s enjoyment of sex. To me, this older work is more progressive and sexually enlightened than images being produced today. If I had more scope for research I would definitely investigate this regression further.

The Wiki thread detailing Japanese censorship laws on pornography was most informative. What the law predominantly pertains to is forbidding the distribution of “indecent” materials. In some cases this seems to conflict with ideas about freedom of expression, which to me is particularly interesting based on many of the discussion we are currently having in Australia about what could be offensive to people vs. what constitutes your right to free speech. It seems to me that in Japan the Criminal Code is interpreted as ‘sex is ok as long as you don’t explicitly show genitals’. Though many sources appear to indicate that while this is a punishable offence, only one case has gone to trial in 20 years (according to a number of blogs who all seem to get their info from Wiki).

This train of thought also got me thinking, are these strict laws a product of a prudish or conservative aspect of Japanese culture? I don’t believe in gratuitous displays of sexuality, but it’s certainly shouldn’t be taboo or something to be ashamed about. The West is infamous for producing explicitly sexual and violent content, however we are much stricter on child pornography than Japan was up until earlier this year, as I mentioned in a previous post.  To me these feel like incongruities that are difficult to navigate.

It’s definitely been enlightening for me to delve into Japan’s censorship laws, because at the outset of my study I was freaked out at just how deeply tentacles had penetrated (please excuse the pun) the hentaiscape. I thought it was merely a preoccupation and fetish for tentacles that sparked their popularity, but now I see it as a more creative way to publish content that would otherwise be restricted. This being said, I imagine that it has also sparked some real tentacle fetishes out there!

Luckily our own UOW professor Mark McLelland, a cultural historian/sociologist specialising in sexuality and new media with a focus on Japan (talk about serendipity), has done the hard yards for me. I will be drawing on some of his publications in this post, however the full range of his works can be found here, very comprehensive! One idea that McLellend (2012: 2) brings up in his book Love, Sex and Democracy in Japan During the American Occupation is that of habitus, or “how people’s experience of embodiment differs between genders, cultures and time periods”.  He draws on the example that in postwar Japan not only did newly imported American models of courtship radically transform dating practices and attitudes towards sex, but the volume of public discussion and discourse into sex and sexuality noticeably increased, as there was a clear need to “renegotiate and redefine male-female relationships” due to changing behaviours (Ibid.: 5).  This meant radical sexualisation within the popular press, and the proliferation of images of women’s bodies in ways that would have been inconceivable in the years prior. It is during this period that hentai culture, true to the Japanese meaning of the word, began to really develop.

Moreover, I find this terminology, “the modern woman”, very striking, because further research revealed that medieval Japanese culture promoted fairly liberal, open attitudes toward sexual activity, however during the Edo period militarism, paternalism and Confucian thought began to impact societal beliefs about women and sexuality (Deal 2005: 346).  Thus the idea of the modern woman, with her newfound sexual freedoms, is in fact a concept embedded within Japanese history and has taken on new forms over time.

Returning to the idea of sexual imagery, Stockins (2009) says that “images of erotica and the female form were common in Japan’s early art as they still remain today in contemporary Anime and Manga”. If I had more scope for research I think it would be a very worthy study to compare how women were portrayed then in relation to now, especially the women in hentai. As I mentioned in a previous post I think there is an incredible paradox between the freedoms the “modern day woman” is assumed to have and the way the female body is used in media.

Stockins, J. 2009, The popular image of Japanese femininity inside the anime and manga culture of Japan and Sydney

This week I’d like to strengthen my autoethnographic research through a closer examination of how my own perspective and lived experiences frame my understanding of the hentai culture I’m studying. As Dyson (2007: 39) says, the autoethnographic “author and researcher necessarily reveals his or her hand, or voice, up front”. For me this means being open about the ways in which my personal beliefs and attitudes underscore the relationship that has begun to develop between myself and my chosen field of study. This kind of transparency is crucial for the author to then begin asking questions about how their own position acts as a lens that filters, refracts and interprets the cultural phenomenon they are studying (Ellis & Bochner 2000: 739). 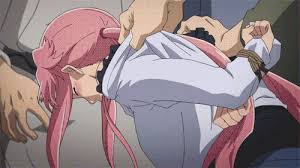 Dyson, M. 2007, ‘My Story in a Profession of Stories: Auto Ethnography – an Empowering Methodology for Educators’, Australian Journal of Teacher Education, 32(1).

While Otaku is the word used in this specific context, I would relate this phenomenon more broadly to fetishes, which emerge from all cultures globally. From a psychoanalytical perspective, a fetish is an “object providing sexual gratification… among the objects frequently sought as fetishistic are shoes, bras and panties, etc.” (Lowenstein 2002: 135-136). The idea that some hentai fans have a preference for shimapan fits neatly into this definition. After contemplating it more deeply and reflecting on this further research, I feel more empathetic towards those discussing their fetishes in forums in such a forthright manner. I certainly don’t believe it’s anything to be ashamed of (unless of course your fetish is liable to cause harm to another person), and it’s great that the Internet has produced a platform for people to discuss what might otherwise be considered ‘oddities’, save for the fact that they now form part of a community with similar interests.

Maybe I am part of the in-group now, cause I get it!

I think the process of turning my autoethnographic study into a digital artefact will really bring to a head all the tensions I’ve been having with this topic. I have to find a way to channel the aspects of this study that challenge my ideas of what I consider, as a Western feminist, appropriate representations of men and women, but also express it in a way that I feel comfortable sharing with my peers, i.e nothing too graphic that could offend someone.

I’m thinking I’d like to create some parodies of the genre, perhaps with clear role reversals, but my drawing skills are, and I’m being generous here, limited. Though that doesn’t mean I couldn’t do some kind of digital collage. Or I could even take an existing video and subtitle/dub it with an altogether different dialogue that subverts the original meaning.  Maybe even get some of my friends involved and do an improvised, collaborative re-dub.

Me? Perverted? I only imagine beautiful things…

Choices of countries to compare:

Tumblr post – We will all contribute to and build a tumblr post that combines images, videos and links to relevant sources with our research and analysis. Our posts will attempt to highlight what distinguishes hip-hop from each country and makes it unique.

Each member should conduct their own research to answer these questions, and others that may arise, in relation to their assigned country.

Any relevant sources and ideas should be communicated via tumblr throughout the four weeks, not just at the end, so the final product reflects a cumulative process.

The group will meet up to develop our presentation. This will mean deciding on the most salient features of the research, talk about what we expected to discover from the research and whether these expectations differed from the outcome, how the results from each country differed and how we can tie in all the results to present to the class.

What do Pirates of the Caribbean, Avatar and The Fifth Element have in common? Or Shakira, Angelina Jolie and Spiderman? It would appear that these movie characters and celebrities have all been transformed, in varying degrees of realism, into the stars of anime porn. This doesn’t surprise me in the slightest, I just wonder if these celebs have seen their animated counterparts and wonder what they think of it. Is there a case to sue the artist on the basis of.. well, defamation? Again I’m left trying to trace the boundaries of this sub-culture. If someone is depicted using an overtly cartoonish style, does that have less potential to offend than an image with a higher degree of realism (think Spongebob of Spongebob Square Pants vs Andy from Toy Story 3)?

very realistic vs not so… sorry if it’s creepy.

I think this is going to be an interesting and challenging study for me because at this point I am so far from understanding the appeal of this weird sub genre of anime, and why people watch and create it. Not to mention the fact that I have to share my reflections on these explicit films with a class full of strangers.

So after my first search in google using the words “manga pornography”, that word ‘confronting’ rears its head again. In June this year (wtf.. only this year??), Japan finally voted to ban the possession of child pornography, though manga comics and anime videos were excluded from the bill “after calls to protect freedom of expression”. This is a really serious issue, and it is deeply disturbing that the sexual objectification of children is of secondary concern to protecting the rights of those people wanting to “express themselves”, and in turn preserve and promote this sick trend.

[Side note] Ok, I just thought about this a bit more and now I’m confused. Lolita, one of my favourite books,  clearly crossed the line I just drew. After it was first published, it was immediately banned for being obscene. Now it is widely read and has been made into two movies. The boundaries of artistic licence are very blurry.

Interesting vlog talking about the American media’s reaction to the above issue, highlighting the difficulty in distinguishing sexually suggestive/pornography/young girls/minors in manga and anime.