So far, BCM320 has proved to be a subject full of ‘first times’ for me. In week 1, our screening of The Host was my first experience with Korean film, and this week was my first time watching Japanese anime. Our week 3 screening was Katsuhiro Ôtomo’s Akira (1988). While neither of the screenings thus far would be my typical genre of choice, I am enjoying the gentle exposure to the diversity of Asian media cultures.

In order to recognise how my cultural background influences my consumption and interpretation of Asian media, I will be engaging with the self-reflexive practice of autoethnography. According to Ellis et al (2011), “Autoethnography is an approach to research that seeks to describe and systematically analyse personal experience in order to understand cultural experience.” As I outlined in my previous post, I am third generation born and raised in Australia, and have had little to no engagement with Asian media until this point. Therefore, I acknowledge my own inadequacies on the topic of anime, as my perspective is heavily Eurocentric and I am largely uninformed on the topic.

This week, the live tweeting became easier to concentrate on, as I have also been required to do this in other subjects. However, the version of Akira that was screened in the seminar was both subtitled and dubbed in English, which altered my ethnographic experience. It felt jarring and inauthentic to hear the characters speak in English, and the words did not match the subtitled text. Unfortunately, the unusual sub/dub disturbed my viewing, and I would have preferred for the characters to be speaking Japanese, as I followed on reading the English subtitles. 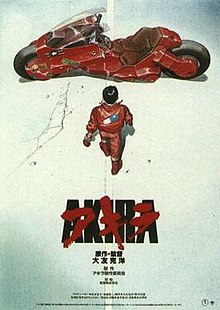 Akira is set in a dystopian, Neo Tokyo in 2019. Since we’re currently living in the year of the films setting, this can inform our perspective, particularly regard how it relates to our modern lives, as we draw parallels to our society in its current climate. Although the films prediction of the future is physically incorrect, the themes presented transcend cultural, historical, and generational boundaries. In saying that, our interpretation of the turmoil experienced in the film is influenced by our personal context. Personally, I recognised the startling relevance of the themes, despite their execution being slightly inaccurate. The themes of government corruption, transnational hostility, and allusion to World War II are obvious to me. As I stated in my previous post, I am a history fan and consider myself well versed on Japanese modern history, hence why I am able to recognise these issues. The universality of the themes illustrated in Akira is also demonstrated through their connection to the political themes in last weeks screening The Host.

Pitlane Magazine (n.d.) hails Akira as “the film that introduced the world to anime… being a corner stone in story telling and the template for much of the anime released to this day”. Thirty-one years after the release of this film, it is still introducing people to the genre of anime (me!), and the film is still being referenced in modern popular culture. The most notable examples being in Michael and Janet Jackson’s video for Scream, a scene of the film can be glimpsed on a flickering screen in the background. Kanye West also channelled his inspiration for Stronger into a visual love letter to his favourite anime, Akira.

12 years after the release of Stronger, the subject matter STILL seems to be relevant to the current state of the world #BCM320

And last but not least, as the entire cohort pointed out on the #BCM320 Twitter hashtag, Stranger Things.

Ultimately, the practice of autoethnography dominates my viewing and interpretation of the films presented in BCM320 as my personal perceptual framework constantly influences me.