The monster is not the focus of ‘The Host’, but only a tool to give narrative to the film’s structure, a surface problem leading to deeper layers of meaning.

I was born in Vietnam. An Asian in every way.

I grew up, to put it in a visualized way, ‘in the middle of Hollywood and Asian cinema’. During my childhood and adolescence, I let myself be immersed in the fantasy world of Chinese movies, such as the one and only ‘Journey to the West’. I would tune into Disney channel to go on an adventure with Ariel the Little Mermaid and Woody from Toy Story, or HBO channel where all kinds of Hollywood movies were screened. And when the night came, it was time for the Hallyu Wave, time for passionate Korean love stories and relatable, heart-warming Korean family dramas, such as Boys Over Flowers and Reply 1988.

For many years I have been exposed to a mix of genres and film nationalities. I have seen, and loved, numerous Korean films, which always profoundly talk about social phenomena and issues.

But never in my life have I watched a Korean monster movie.

Nor a Bong Joon-ho’s production.

At first, I thought the film was going to follow the Hollywood monster-movie motif, merely focusing on the fight between heroes and a creature. The movie begins with the shockingly sudden appearance of the creature, proceeding through the innocents-in-danger scenario and the unexpected bravery from a crew of characters (Klein 2008).

However, as it progressed, I came to realize that ‘The Host’ is much more than that. It is a departure, a divergence from the Hollywood convention. The monster is not put in the spotlight but rather used as the background to shed light on Korean realities.

The dark sides of Korean modernization and authority are addressed by showing how the Park family gets tangled up in Seoul’s bureaucratic and capitalist modernity (Klein 2008). It was frustrating for me to see the government and the media lying about the existence of the deadly virus, the police ignoring Gang-du’s claim that he receives a phone call from his daughter, and the fumigator easily being bribed by a bucket of spare change (which is also a bit of humor and sarcasm coming from the director, and I enjoyed it).

I also came to notice that ‘The Host’ is trying to criticize Korea’s relationship with, or more specifically, Korea’s submission to the United States. I am haunted by the scene of the American mortician ordering his Korean underlying to pour hundreds of formaldehyde down the drain, the U.S official forcing the Korean doctors to drill into Gang-du’s brain, and the “Agent Yellow’ scene, which reminds me of the Agent Orange contamination during the Vietnam war.

Besides Korean realities, The Host also highlights the beauty of family bond – father-to-daughter, father-to-son, brother-to-sister and sister-to-sister love, which is the only motivation for the characters to unhesitantly sacrifice themselves in the fight. It was outstandingly smart and subtle of Bong Joon-ho to express the characters’ longing to reunite with and take care of Huyn-seo through the eating scene, which moved me emotionally. 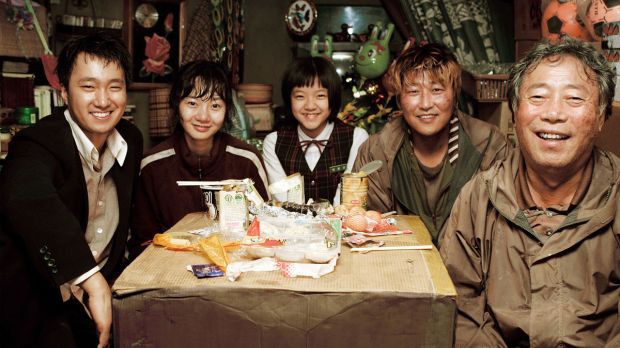 What surprised me the most is that Huyn-seo could not be saved in the end. In the scene where she is pulled out from the monster, I was expecting her to wake up as a miracle, which is very common in the Hollywood films that I have seen. But she does not. Yet, the other boy, wrapped in her arms, is still alive, thanks to Huyn-seo.

A symbol of humanity.

I did not have the opportunity to experience live-tweeting as I was sick and could not attend the tutorial. Yet, I took notes while streaming the movie at home, jotting down all my thoughts and emotions, which made me watch the film more attentively and critically. Reading subtitles was no big deal for me since I grew up watching movies from other countries.

It is so much more than that.