Not often does one find a film that well and truly blows your mind. To use an appropriately Aussie euphemism; Akira well and truly knocked me for six…

“Autoethnography: an Overview” (Ellis, 2011, (1) describes the process as a “research method that seeks to describe…and analyse personal experience to understand cultural experience.”

It’s currently a few minutes past midnight, and having finally finished the film I find myself devouring readings and articles, trying to soak up as much additional information about this film as I can.
Over the years, I’ve had minimal exposure to the world that is anime (if not for a childhood screening of Howl’s Moving Castle.) I watched the credits roll, no initial expectations (and truthfully) a hint of skepticism.
Now having seen the film, it is plain as day to see why Akira left a mammoth legacy, on not only the development of anime as a genre, but also it’s influence the rest of the western world, through stories like Chronicle (2) and Stranger Things (3), and musicians like Kanye borrowing heavily (4) from it’s aesthetic.

I myself am bit of a wimp, with little taste for violence, and was surprised by the fascination at the incredibly violent, yet visually beautiful film.
Many a critic of the modern hollywood blockbuster criticises it’s use of gratuitous violence as unnecessary, but in the case of Akira, the more graphic moments seem to complement the sinister atmosphere of this film – a an atmosphere that seems endemic to Japanese film culture.
In a Youtube clip (5) detailing the film’s history, the point is made that the western action genre tends to bank on the hero saving the day, and averting the disaster. This then compares to the often more sinister Japanese equivalent, owing to the cultural impact of the atomic destruction of the 40’s. The experience seems to have birthed a desire to immerse the audience, first hand into the experience of destruction of cataclysmic proportions; wreaking not only physical, but mental havoc on the surviving characters, and equally stunned audience.

There is a section in Ellis’ (2011 (1) writing that refers to the process of autoethnography in therapeutic terms, that is to “write to make sense of one’s selves and one’s experiences.” My head is still buzzing, and I am struggling at this late hour, not only to process, but express my thoughts on this film.
That being said, having such a strong positive reaction aids the process of self reflection, “assembling one’s experiences through hindsight.”

Recognising the resulting epiphany upon the film’s conclusion, the fascination with the gloriously rich animation, the vast spectrum of emotion, and in short the extravagant quality of the film, is an experience I’m unlikely to forget. 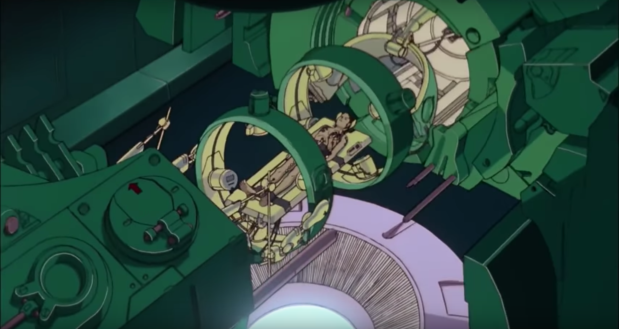