An auto ethnographic experience into North Korea can be difficult as the rest of the world doesn’t have access to many parts of it. Which is why a subreddit dedicated to pictures of North Korea proved to be an interesting way to delve into this isolated country. The subreddit North Korea Pics is exactly that. Those who have visited the country post a range of pictures of various aspects of day to day life. We began to look into these photos to gain a better understanding of North Korea and what those on Reddit thought about it too. These are the images that stood out to us most – This is the capital city of North Korea, Pyongyang. Pyongyang which translates to flatland (Lonely Planet 2017) was basically built from scratch following the Korean War which ended in 1953, so it is a relatively new city with new city with attractions being added in recent years such as a water park (Branigan 2015). Pyongyang is a city of the elite with the population and foreign media coverage being heavily controlled. This would mean that access to this city by journalists is regulated.

This brings us to the point of the actual image itself, how it was photographed and uploaded to the internet. This Reddit thread had users question how this image was uploaded. Through the comments we discovered that North Korea doesn’t in fact use the same internet as us, they have an intranet that excludes sites like Reddit (and most others, excluding these). The user had gone back to China and uploaded this photo however, many users found it hard to believe that this was North Korea and this image is quite beautifully architectural. Looking at these solely as works of art, these are really amazing and dynamic illustrations that give off almost a retro vibes. The user who took this image clarified that this was taken at the DMZ where there are stores that tourists are taken to purchase them these posters. In the comments of this thread a lot of others thought had similar thoughts voicing that they would be keen on buying these. It turns out, there are these posters also sold on ebay for around $10, so it doesn’t seem to hard to get your hands on it.

Looking at this image also brought to mind the case of Otto Warmbier, the American student who tried to steal a propaganda poster in North Korea. He was subsequently arrested and sentenced to 15 years imprisonment and hard labour for the crime. It brings to question that if buying these posters was an option why would you attempt to steal them from a country as strict as North Korea? This image is quite significant as we soon realised that images of traffic ladies were becoming quite common throughout the thread. As we dug a little deeper we found that there are not many traffic lights which is why traffic police are utilised. What was even more interesting was people’s reaction towards the lady traffic police. Reading into the comments we found that these traffic ladies have an almost celebrity status with some strange fetishes surrounding them. It didn’t take long to find fan sites and pages dedicated to these women as well as merchandise made in their honour. They are known to be sexy and handpicked for the role. However their careers as traffic ladies are not too long lived, having to retire by the age of 26 (McLaughlan 2017). These women are iconic symbols of the capital (Gold 2015) and they can often be seen on posters, flyers and billboards as a form of national propaganda. 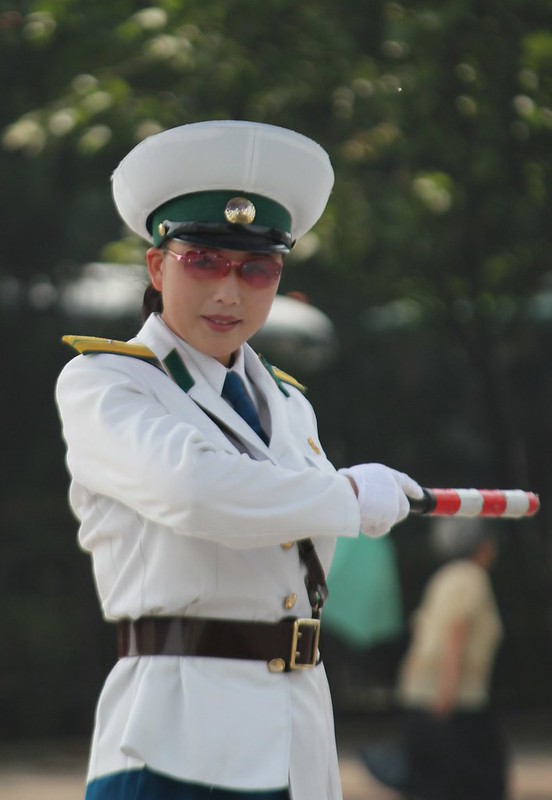 We found this image so intriguing as people are using this underpass even though there are no cars in sight. Let us be honest, jaywalking here in Australia is something we’ve all done and this interesting form of road crossing is not something we encounter on our streets.  However, it seems that these underpasses are not only used as underpasses. In an article by Evan Onosos, who visited North Korea, it was explained to him that everything has a dual purpose and these underpasses are also used as shelters in the event of nuclear war.In the distance there is a traffic woman to direct traffic but ironically there are no cars. Some comments were saying her job can be easily replaced by just building a roundabout in this intersection. Initially this photo seemed like a really risky one to take. Without much context we found this particularly striking. This was a military parade but the exact context of the image wasn’t apparent. Researching further we found that this was taken from a vlog by Danny Dobson, a British vlogger. It was stated that this was uploaded after leaving North Korea as some Reddit users feared for his safety. This speaks volumes about the perceptions of North Korea and how something as simple as a photograph can be potentially dangerous. This image for us creates a sense of normality that many don’t see of North Korea through this couple of school girls. One of the first things you notice is the large sign in the background that almost resembles the Hollywood sign. In the comments a user has translated the sign which says ‘follow your leader to the end of the world’. This really reinforces the totalitarian state of North Korea and emphasis placed on the Kim family.

This image also sparked our interest in the education of North Koreans. In a report by Baret Hathcock, education is a requirement for all North Korean children between the age of 5 – 16. There is a strong emphasis on technology and the sciences and to build train workers for industries, however the main aim of the education system is to promote the communist ideology that North Korea holds.

So how did this subreddit thread contribute to our understanding of North Korea? We found that there is so much more to North Korea than what we see and hear in the media. The sense of normality really struck us in some of the images, the architecture, and school kids going about their day. On the other side its unique elements like the traffic ladies and military parades showed us a unique side to North Korea and led us on a journey of epiphanies that enabled us to understand those who live there. Our research allowed us to look past the media depictions and dig further down into the root of North Korea beyond the media perception to appreciate its cultural significance.

McLauchlan, K 2017, ‘Driven to distraction: How Kim Jong-un’s ‘traffic ladies’ are hired purely for their looks, have to retire at 26 and MUST be single’, Daily Mail Australia, 14 June, viewed 17 October 2017, http://www.dailymail.co.uk/news/article-4602298/Driven-distraction-Pyongyangs-traffic-ladies.html