It seems intense some of the processes of skin whitening, using products containing bleach, overdressing, excessive make-up and even crushing pearls to powers for oral consumption.  Not that I can judge, melanoma is the outcome of consistently sun baking.

After discovering the trend, I began to look into the history of pale skin, which dates back to Ancient China, India and Japan and then later spread further across Asia. Their reason for practice was to infer aristocracy and wealth for both males and females. Those with darker skin were associated as servants or workers because of labouring under the sun. 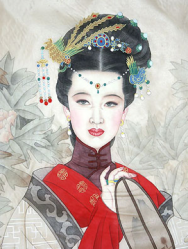 I found this interesting because throughout High School especially in English subjects I was always taught that white was a colour to represent things like purity, innocence, goodness and virginity, not a matter of wealth or social class.

I haven’t started looking at the physicality of the cream or application yet, because the product still hasn’t arrived. However, I wanted to take a look at the advertisements and how these products are viewed in current society as well as any problems associated with whitening creams.

Firstly, I took a look at an Indian ad for Fair and Lovely which is aimed at men. It was a thrilling story line, a model going for a part in a commercial but his face is too tanned which is deemed unattractive and another actor cuts in front to claim the fame. A girl recommends he uses Fair and Lovely Men’s Active, and after washing his face with it, we see the transformation of his skin getting 3 tones lighter. With confidence, he wins back the commercial with his face making it on billboards, and ends with him getting the beautiful girl on the red carpet.

I’d say that this ad couldn’t portray and pressure the idea of the beauty of pale skin anymore obviously than they have. Hey, if I was promised fame and love and admiration like this guy in the ad, then I’d want pale skin too. Switching it up now, I took a look at the Chinese ad for Olay skin whitening.

This ad reminded me a lot of the beauty product ads we have at home in Australia. A beautiful model (beautiful because of the product – duh, they want you to buy the brand) with lots of close ups to show just how effective it is for her skin, no blemishes or darkness no matter how close you look. Then followed by a scientific explanation and scientific visual imagery that most likely makes no sense to anyone (not me anyway) describing how scientists designed the product for a successful specific function.

MD Arroyo explains in his article that scientific language in cosmetic advertising tries to “persuade the addressee… to gain credibility” (Arroyo 2013) and to lead consumers to think that “scientific names are going to enhance the product’s performance because they are the result of scientific knowledge and the latest technology” (Arroyo 2013).

Between these two ads we can see a major difference with India focusing hard on the social aspect of whiter skin whereas China; still focusing on the social perception of beauty, urges audiences to look at the science and health behind whiter skin.

What I found has been a problem throughout the use of whitening creams in the past is the mercury levels in them, which is a whitening agent and highly toxic. After looking at the fair and lovely website they state that they do not use or add any mercury into their products. I couldn’t find Olay state the same but the ingredients list on the skin whitening product I looked at  doesn’t display any mercury. Mercury in skin whitening products today is a very serious issue. M Bray for CNN reported (2002) in Hong Kong that two whitener creams (Rosedew and La Rose Blanche) had mercury levels between 9,000 and 65, 000 times the recommended dose, causing one woman to be admitted to hospital and 13 others to seek specialists.

Unfortunately, physical issues aren’t the only problems that can be associated with skin whitening creams. It also has a physiological impact. “Young boys and girls with darker complexions grow up with lower self-confidence, which often impacts their personal and professional success” (Banerji, 2016).

In terms of tanning in Australian culture, it’s so easy for people who can’t tan to get a fake tan. To make your skin white however, is not as easy a process and I can see how this can affect the youth in a society pushing pale skin as a necessity.

To finish, I just wanted to add what I found was a pretty cool fun fact. BCC reported in 2010 that lightening creams in South Asia outsold coca cola bottles. Woah.