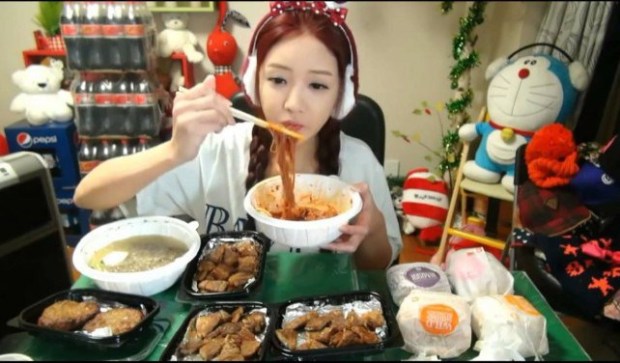 I love food as much as the next person and growing up in as a Vietnamese-Australian I was brought up with quite a wide scope in terms of food culture –  such as diverse flavours, etiquette and perhaps the ability to use chopsticks more competently than a fork.

As I entered the subject of Digital Asia I slowly began to recognise on social media the growing rate and popularity of a different kind videos online. These videos were depicting people, from what I was seeing, mainly petite females, eating large quantities of food whilst talking to a camera and ultimately their internet audiences simultaneously. This triggered my curiosity and put me in a state of awe as I began to look into it’s country of origin, South Korea and dig a little deeper into the industry phenomenon of ‘Mukbang‘.

I found this really interesting because it’s one thing to broadcast yourself singing, playing video games or dancing but within my own cultural parameters, broadcast eating was unfamiliar – which made it all the more absorbing! Typing ‘Mukbang’ into YouTube will unveil thousands of videos, but from my surprise, majority of these weren’t depicting Korean people in the videos but rather Western, hinting that this trend has maybe developed a greater global scale.  I wanted to commence my auto-ethnographic journey with immersing myself with some of the best in the biz, the creme de la creme or the OGs of Mukbang, if you will. So with a quick google search with something along the lines of ‘South Korea’s most famous Mukbanger‘, I discovered Korean BJ (Broadcast Jockey) Benzz and BJ (Broadcast Jockey) Shukii and watched a single video of theirs in its entirety.

Okay, after effectively watching collectively over an hour of broadcast eating I have many thoughts, reflections and questions about the notion of Mukbang. Firstly, besides the straight-up obscurity of it for me, it is impressive. It is impressive to watch a single person consume enough food to feed a group of people, especially that of very slim individuals that were in these texts. I don’t know if these videos are suppose to have a certain effect on people but as I watched, it began to trigger my hunger.

Secondly, I found myself continuously trying to wrap my head around the idea that people are being paid handsomely and gaining ridiculous internet stardom from what I have just witnessed. Reading into this form of media more-so, whilst I was watching this I learnt that a lot of this Mukbang content is streamed to live audiences, mainly through AfreecaTv (from the symbol in the corner) – which is a P2P technology-based video streaming service based in South Korea. So, there is a huge viewership for these videos where hundreds of thousands of people tune in during to interact with the creator and also millions then after the initial broadcast.  But with this, during the experience I could definitely acknowledge a sense of community, a sense of company and maybe even a level of comfort for the regular viewers of this type of content. I found it funny in the videos that every so often the person would raise the food they were about to eat and show it to the camera really close up, almost as if they were giving a bite to the audience. This was perhaps maximised when I switched over from watching the Mukbangs on my phone to then connecting it to my smart TV, it made it a lot more ‘real’ having the videos play a big screen enlarging the eating visions of these people. The broadcasters entertain their audience by describing every detail about the flavours and texture of the food they are devouring. I felt that it was less awkward, it gave the content more substance than just eating and it clearly matters to the public for them to take time out of their lives to comment on features within the video.  Building upon this theme, I feel these eating individuals are placed on a pedestal where audiences then become fans – and like any other industry like K-Pop for example, celebrities/micro-celebrities are birthed.

I am not a fan of loud eating or eating sounds at all for that matter, it’s pretty much nails on a chalk board for me and as I continued to watch the noises were torture at some points. And as painful as it was, I began to think that might be a reason why people watch. I entered this experience where I could see a stigma of fetish-related reason as to why people watch by the herd. Whether it be people tuning in to watch, from what I was seeing young, for the most part good-looking, K-POP-esque individuals devour food. But perhaps may also hold weird fixations like that of listening to eating sounds similarly to the also growing trend of ASMR that I have also come across in the media today. Autonomous sensory meridian response (ASMR) is a term used for an experience of physical sensation of tingling that often begins in the scalp and moves down through the spine and sometimes to the limbs. It can typically be induced by auditory behaviours (sounds that some deem to be relaxing), which in fact includes eating sounds.

Then I found this…

At the end of my immersion into this Korean food trend I felt as if though I kind of had a somewhat better understanding of why fans of this form of media develop interest into it. It really did remind me of how other forms of expression and online engagement occupy social media platforms, it’s just a case of different audiences and relevance to them. Interpreting this from a foreign context my reading of Mukbang culture transitioned from a ‘This is really weird’ standpoint to a ‘This is really weird to me still, but I kinda get it’  one.