It took me a long time to understand how to begin an autoethnographic study. The term itself is not hard to grapple but it is difficult to wrap your head around once you’ve spent almost four years at University taking yourself out of the equation and supplementing it with work from other people who are far more intelligent that you.

But after a lot of looking around, Hoppes (2014, p.64) summarised it perfectly, “autoethnographers’ methods vary, but generally include discussion, reflection, note-taking, emotional recall, and identification of categories and themes yielding a narrative that affords both the inside view of a research participant and the outside view of a researcher”.

Autoethnographic research is also somewhat of a Pandora’s box. It takes you on a journey way, way, way to the right so you are immersed in a different culture. But then spins you around and around and expects you to run all the way back in the opposite direction so you can tell people of your journey.

But as Hall (Chang 2008, p.34) eloquently suggests, the key to studying another culture is to not to simply understand a foreign culture but to better understand our own or to be better equipped.

This is particularly accurate for me as I am exploring tones of feminism through the text Sailor Moon. Initially I was annoyed that there was loud, huge sign that said, “here is the feminist part, ding ding ding”! On reflection, I feel quite stupid because there is absolutely none of that in my own culture so why would I expect if from another?

The genre that Sailor Moon falls under is Shoujo which often addresses a “girl’s first love, and the innocent excitement and sometimes painful drama that comes with it. It also deals with friendship and personal development” (Lai, 2015). Conversely, Lai (2015) says that another genre targeted towards female audiences is josei which uncovers what it means to be an adult, what it means to be a woman and with it a sense of maturity and readiness for adulthood.

This was interesting as I did not know that there were so many levels and areas of manga and anime. So maybe I am placing too much ‘pressure’ on Sailor Moon to be a feminist text much like you would not expect the Saddle Club to be teaching girls about what it means to be a woman.

Despite all this, Newsom (2004, p.58) does make a point regarding the Sailor Scouts who are powerful and feminine characters as well as their power being dependent on femininity. Femininity is a literal requirement of being a Sailor Scout.

Sailor Scouts also represent a planet and this is believed to be refelctive of their personality and behaviour. 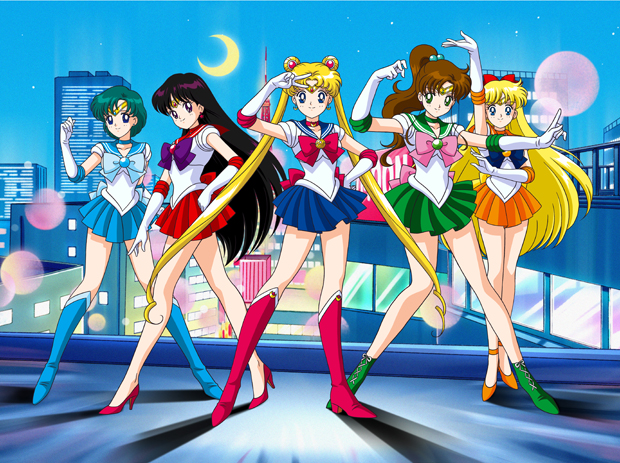 The winning combination of these girls enables a stronger connection with the characters as you are able to identify yourself with at least one of them. Similar to the Spice Girls who were also riding the wave of Girl Power in early 2000s. Everyone knew if they were Sporty, Baby, Posh, Scary or Ginger.

It truly is a coming of age piece that exemplifies what it means to have friends and that they will have your back no matter what. The only other observation that I have recently made was the fact that the evil woman Queen Beryl is wonderfully evil and has the greatest cackle ever. I was apprehensive when I saw that many of the female characters who are evil tend to have submissive males, as I thought it really could go into the realm of misandry. But it has not from the little that I have observed thus far.

Overall, this show is all about amplifying the ‘girls only club’, the power of friendship, kicking some evil butt and all whilst looking fab-u-lous in those outfits, heels and with hair always on pointe – yes, that was supposed to be sarcasm. I still loathe it.

Ferris, A, (2014), ‘Why Sailor Moon Is One of the Greatest Feminist Stories Ever’, The Absolute Mag, accessed 19 September, http://theabsolutemag.com/26731/longreads/why-sailor-moon-is-one-of-the-greatest-feminist-stories-ever/

Lai, A, (2015), ‘Looking at female characters in Anime and Manga’, The Mary Sue, http://www.themarysue.com/female-characters-anime/