Initially I found the concept of autoethnography incredibly confusing. I’ve now come to understand that autoethnography is a way of writing about another culture from the perspective of your own, whilst acknowledging the personal biases that inevitably come from this.

My own consumption of Asian media has been very minimal. I do have quite a few Asian friends, but that’s where my exposure to Asian culture really begins and ends. Coming from zero gaming experience/interest I was skeptical of the film ‘State of Play’ from the outset. To be frank, I wasn’t very interested in watching a Korean film about gaming ~ But I was interested in noting which parts were unfamiliar or strange to me, and determining how this highlights my own cultural (in)experience. Before even beginning to watch the film I knew that I wouldn’t appreciate it, based on my own interests and cultural identity, and I wanted to see how this influences my response to Korean culture. Below are my observations of the film:

Having zero knowledge of the profession, watching this film definitely shone light on a whole aspect of Korean gaming culture. As a female Australian I feel like the entire concept of this industry is so different from anything I’ve ever experienced, and thus find it difficult to empathise or relate to the struggles of the individuals depicted in the film. Whilst watching the film I was able to draw comparisons between Korean eSports and Western football teams by the way in which the players were commoditized, and idolized within the community. 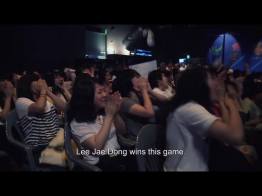 Screenshots from the film; State of Play, 2013.