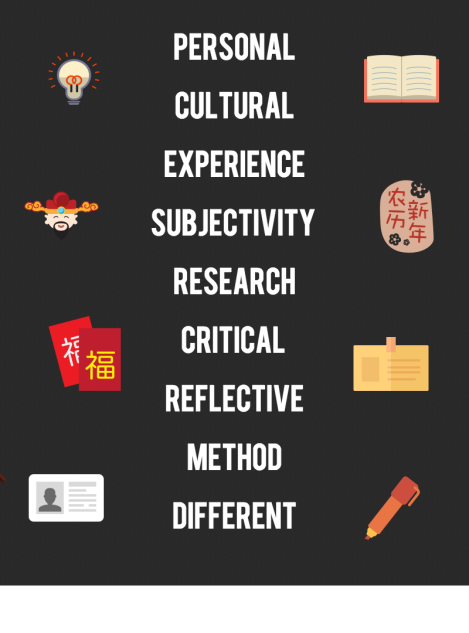 Research is a perplexing term that can be interpreted numerous ways by countless people…. Previous to university I would have nonsensically considered thorough research to include a few surveys, statistics and a literature review. This is why I am excited to encounter and produce an artefact using autoethnography as a method of research.

Ellis et al (2011) describes autoethnography as a process and a product. This method of research aims to use characteristics of both autobiography and ethnography to treat research as a political, socially-just and socially-conscious act (Ellis et al 2011). Autoethnographic investigation works by including thick descriptions of personal and interpersonal experience (Ellis et all 2011). This research method in relation to older methods of research is able to reach a wider audience and can make social change possible for more people (Ellis et all 2011).

Autoethnography is often criticised for being too artful and not scientific enough (Ellis e all 2011). However, autoethnography is praised for understanding that personal opinion and experience will effect findings depending on the individual undertaking the research.

As a class we watched Godzilla (1954). I’d missed Chris’ description about the film, I was very confused at the initial opening scenes. When I tweeted,

‘Maybe a large unknown species got hungry and ate the boat, like we were before the tiny teddies,’

I was completely joking…for one reason or another I thought the film was about war. Much to my amusement I was right about the murderous unknown species. What distracted me throughout most of this film was the weird framing, there is an entirely different cinematography involved in comparison to mainstream ‘Hollywood’ films. One ‘weird’ shot that I distinctly remember is when there was a long radio announcement, the shot was of the physical radio in the house not of the person conducting the announcement. I found this film to be very fast paced and overly dramatic. I also noted that often throughout the film Emiko (the main female character) was excessively distressed and frantic.

I thoroughly enjoyed watching this film, however I need to admit (hesitantly) that I missed a lot of the smaller details that happened in the storyline. I was very confused around Emiko’s romantic situation. For example, I wasn’t aware Emiko was planning to leave the man she was engaged to until I read about it online afterwards. I also found the link between the Godzilla creature and radiation confusing in the film. What I found most interesting about watching the film, was the things I missed that others picked up on and live tweeted about.

After Chris’ recommendation in class,  I also decided to read Alsop’s (2002) Home and Away: Self-Reflective Auto/Ethnography piece. Personally, I resonate greatly with Alsop’s piece because my parents immigrated to Australia in the early 1990’s from Northern Ireland. My sister and I were born in Australia and have lived here all our lives but still consider ‘home’ to be in Ireland. Phone calls from aunties and uncles would often end with the question, ‘And when are you coming home?’ I have struggled with this my whole life. I was often furious with my parents for taking me away from my ‘home.’ When my parents did decide to leave Ireland they knowingly created a divide into a here and a there (Alsop 2002).What they did not realise is that there two ‘Australian’ children would also be included in this divide. Despite growing up listening to Irish rebellion songs and not Daddy Cool’s classic, Eagle Rock I have a great ability to empathise and understand ‘others’ cultures and traditions.

I look forward to learning and using this method of research throughout the semester.