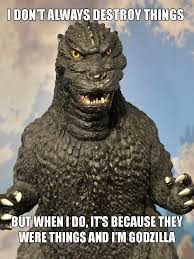 Autoethnography is a completely new term for me. In the context of Digital Asia it essentially describes the way we analyse our experiences of consuming Asia related content, which is slightly obscured due to our own personal context and understanding. It is the way in which our own personal experiences influence our understanding of cultural texts. As Ellis says we are “readers into the scene…in order to experience an experience”. With many different types of media available at simply the click of a button, Autoethnography shows how our personal understanding of different cultures can create a bias perception, whilst the text in which we consume can often challenge such ideals.

I personally have had a limited experience of Asian culture, however I do have a guilty pleasure for the dating show ‘If You Are the One’ and the typical orientalised movies such as the classic Disney film Mulan (which is definitely one of my favs). I have also re-vamped my love for Pokemon by playing Pokemon Go! Apart from this, to say my experience of Asian culture is limited is actually quite accurate.

Gojira was actually my very first experience of a Godzilla film. Although I am aware of the creature, I had this pre-conceived idea that Godzilla was very similar to that of King Kong. Despite this, I was thrilled to learn that we were watching the 1954 film as I actually adore black and white films. Perhaps this is due to my mother’s influence. We would watch Doris Day and Elizabeth Taylor classics, which were nearly always in black and white (if you haven’t see the Mirror Crack’d I highly suggest you do). It was also great to be live on Twitter and observe other peoples interpretations of the film. Here are some of the observations and notes I made during Godzilla:

And here are a couple of screenshots that highlight some other observations myself and the DIGC330 class made: 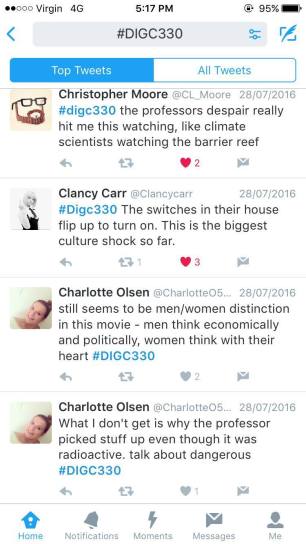 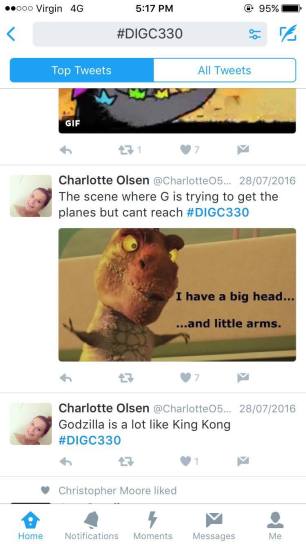 All in all I enjoyed the movie and found it quite easy to pick out what I thought was specific Asian culture ideas and concepts. Although I think with a bit more research of the themes portrayed in the film, my cultural knowledge will continue to expand and provide me with insight into to things that perhaps I disregarded as significant. I’m looking forward to this!