When I needed to find an Asian celebrity, I went to my best friend – Google. You would be surprised how many search results come up when you type in the words ‘Asian’, ‘celebrity’ and ‘cop movies’. I stumbled across a male actor I had seen before. Meet Andy Lau. Famous for being a ‘jack of all trades and master of many’ – an actor, producer, director, Cantopop singer, songwriter…well you get the point. I first met Mr Lau just last week…not literally of course. I first saw him briefly in the ten minute clip of Infernal Affairs (which I discussed in last week’s post). Given that I only saw him for a few moments as the start of the film is an eight minute flashback, my impressions of him were…let’s just say they were pretty limited. So I thought this would be a perfect opportunity to not only watch some more Infernal Affairs to see how good of a baddie he really is, but to do some research into this very intriguing celebrity.

The next 10 minute segment of Infernal Affairs definitely broadened my understanding of Lau as an actor. As I was watching the drama unfold, I had come to an interesting paradox. As much as I hated Inspector Ming for how corrupt and evil he was, at the same time I loved his character – Ming is the perfect villain because everyone loves to hate him. At one point in my viewing time I became quite annoyed when Inspector Ming who’s so desperate to ensure that no one finds out he is a bent cop, he walks into the interrogation room and fools the criminal into believing that he is his attorney so he can shut him up. The scene is quite something.

But celebrities in Asia have become much more than just your garden variety actor or singer. They are product endorsers, advertisers, marketers…they provide 24/7 commentary on the latest products to hit the shelves. Andy Lau is no exception to this branding movement.  The ‘Andy Lau brand’ very much mimics the cop and criminal characters he plays in his movies – charismatic, likeable and cool. It doesn’t matter if he plays a good guy or a bad guy, his appeal reaches far and wide both in Hong Kong and outside of it – women want him and men want to be like him.

This theme of branding is apparent on Twitter. After a search of Andy Lau, I discovered a Twitter handle devoted entirely to his film career which has been created by fans for fans. There are several tweets posted in the last few weeks encouraging people to watch Lau’s latest cop movie Blind Detective. This is clearly an example of ‘consumer-generated advertising’ – “when consumers create brand-focused messages with the intention of informing, persuading, or reminding others” (Jin Annie Seung-A; Phua, J 2014, p183). As I have come to understand through my experiences of Twitter, “the more followers one garners on Twitter, the greater perceived social influence one has” (Jin Annie Seung-A; Phua, J 2014, p182), which is certainly the case here given the account’s number of followers. 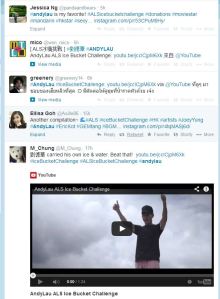