A few weeks ago my roommate (a very excitable young lass) runs into my room overjoyed that one of her favourite anime series, Cowboy Bebop has finished (legally…) downloading after about 2 weeks of constant anticipation (on her behalf). One of our favourite activities is watching television shows together and then vigorously discussing it, mostly in social situations where nobody else cares. While our taste in TV is usually on par there is one area where her interest excels far beyond mine, Anime. My experience with anime does not reach much further than Pokemon, Sailor Moon and a serious love for Avatar: The Last Air Bender (which is not even ‘really’ anime, apparently…). So, out of respect for experiencing new television genres and my dear roomie there is no way I can say no to a sit down viewing of Cowboy Bebop, ‘Session #1’.

So its in the future, there are ‘gates’ in space that allow us to travel from one universe to the next, there is a moody bounty hunting fella called ‘jet’, a dude with a robot arm, some fighting, some dialogue… I should mention that throughout most of this first session I was ‘multitasking’ between watching and Facebooking, so a lot of it went straight over my head, or maybe I am just not that into Anime? (shh don’t tell my roommate). After my first week in DIGC330 I determinedly sat down and watched the next 4 sessions, and I did like it, but I was really trying… I enjoyed the light hearted comic moments however when the anime got darker, dudes with big swishy fringes wearing long leather coats and holding symbolic red roses (ya know?), I started to lose interest again, why was I so bored by the visuals, the storyline? This got me thinking; imagine growing up surrounded by anime and manga comics, your childhood memories brimming with those bright and wacky images. It seems that those cartoonish aesthetics are embedded within Japanese culture, on their televisions and in their advertisements. These images accompany you from childhood right through to adult life. To be honest I am jealous, I feel like our culture is so cemented in reality, it seems so much less… colourful. That’s not to say Japan doesn’t have it’s fair share of darker shades. 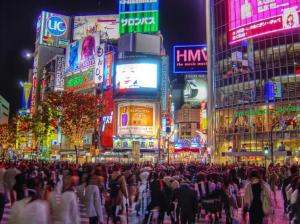 Japans bright manga influenced pop culture seems to contrast so drastically with some of its rigid historical traditions and dark events. When I focus on this contrast I realise that during my visits to Japan the historic and the modern seem so intricately connected. Upon further research this combination of pop culture, art and history are all present in manga comics and anime (I mean heck, even the bible has been ‘mangafied’). Some examples include manga series ‘Barefoot Gen’; a comic loosely based on the authors experience as a Hiroshima survivor, and ‘Grave of the Fireflies’ an anime film referencing the final months of WWII. This contrast and connectedness between Japan’s modernity and it’s vast history might be a good place to start for my research project… maybe. I’m still confused.